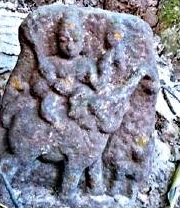 An ancient stone with the image of a hero sitting atop an elephant has been found at Chathurangapara near Kerala-Tamil Nadu border in the district. Researchers of the Archeological and Historical Conservation forum in Nedumkandam who discovered the “hero stone” said that such a discovery has been made for the first time in south India.

“The one-foot stone has the carving of a hero sitting on an elephant with a bow and other weapons in his hands. He has worn ornaments on his ears and neck. The stone depicts a hero with a raised sword in his right hand. Another person and animal form is seen nearby and it was obscure,” said Nedumkandam archeological forum member Dr Rajeev Puliyoor.

According to researchers the “hero stone” was discovered below the hill on the Kerala-Tamil Nadu border at the base of a banyan tree at Chathurangapara. The place is geographically very important on an ancient trade route from Kerala to Madurai that is over two thousand years old. This hero stone is another example of the mysterious history of the high range area.

Historian and former vice-chancellor of Mahatma Gandhi University Rajan Gurukkal said, “It is difficult to date the hero stones without inscriptions or firearms, for the practice of erecting them in the deep south had been common since the Iron Age. They were installed as anthropomorphic memorial stelae in relief design for fallen heroes since very old times. Tamil heroic poems help us associate them with pastoral heroism of cattle raids. The practice continued even into the late 19th century. Keeping in view of the relief features, the hero stone of Chathurangapara appears to be of 15-16th centuries.”

Earlier, for the first time in south India, petroglyphs (carvings on rocks) similar to Indus script on megalithic-era menhirs were found at Chakkakkanam near Nedumkandam in Idukki in 2019. Last year, prehistoric stone monuments were discovered in the catchment area of Anchuruli in Idukki dam reservoir. The 2,500-3,000 year old megaliths, including menhirs, were found after the water level receded in Pezhumkandam in Anchuruli.

“The headstone is a good proof that Idukki was inhabited centuries ago. This evidence also reminds us that the high range claims another unrevealed history,” said Puliyoor.