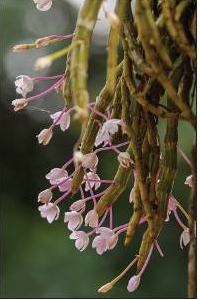 The Anmod Ghat, which connects Karnataka and Goa, has come alive with the beauty of the delightfully pink purple Dendrobium lawianum blossoms.

The Anmod Ghat section connects Goa’s Dharbandora taluka with Joida in Karnataka, and is filled with immense diversity of floral wealth.

The spring season here sees the flowering of a variety of wild flowers. The Dendrobium lawianum is one such species of scented wild orchids, which blossoms during the spring across the Ghat.

Pune-based Mayuresh Kulkarni, a researcher, who is presently carrying out studies on wild orchids, said that habitat destruction is now posing a threat to Epiphytic orchid diversity, like the one seen in Anmod Ghat.

“It is often a cause of species becoming threatened. Dendrobium lawianum, which is endemic to Western Ghats of India, can be seen blooming in natural forest even by the road side. If trees are being chopped then it will be big loss to biodiversity, conservation is key to save nature,” said Kulkarni.

Like other road sections where tree cover has been affected due to work of widening being carried out across the country, the highway passing through Anmod Ghat is also undergoing expansion.

Gajanan Shetye, a wildlifer fascinated with the beauty of the Dendrobium in the Anmod Ghat section, said, “The fragrant species is endemic orchid and for its existence within the fragile ecosystem, insect pollination in the species need specific vectors to visit.”

This epiphytic orchid is generally resilient to even to vagaries of climatic changes due to its adaptive habits and specialised roots.