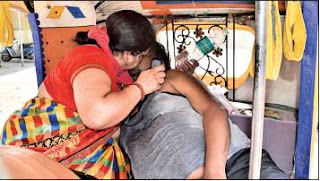 It was the kiss of life of a weeping woman desperate to save her dying husband. But that wasn’t meant to be. Visuals of Renu Singhal trying to revive her man as he lay almost lifeless and cramped in an autorickshaw, sans oxygen or a hospital bed, may well be one of the defining images of this pandemic, a photo that has broken a million hearts. Ravi Singhal, 47, could not be rescued despite Renu’s frantic attempts at mouth-to-mouth cardiopulmonary resuscitation. He died as she cradled him in her arms, his head on her lap.

The autorickshaw was parked right in front of a government hospital. Renu had taken Ravi to at least four private hospitals before arriving at Sarojini Naidu Medical College, where too she was denied admission.

The incident took place on Friday, but slowly the visuals have popped up on numerous screens throughout the country and abroad, triggering shock, sadness and dismay. The couple lived in Agra's Awas Vikas area.

The situation at hospitals across Agra, a Covid hotspot even last year, remained grim on Tuesday. Caretakers of patients kept making rounds of markets throughout the day in search of beds and oxygen cylinders. Several Covid hospitals were forced to discharge patients due to lack of essential infrastructure. Life-saving medicines, too, remained out of reach for hundreds.

According to a top health department official, the oxygen supplied is “far too less compared to the requirement.” At least 70 metric tonnes per day are needed at 48 designated Covid hospitals in the district.

Senior member of IMA, Agra unit, Dr Ravi Mohan Pachori, said, “Majority of the hospitals involved in treatment of Covid-19 patients are suffering from a break in oxygen supply. It will be difficult to save patients in critical condition without that. Machines like BiPAP, HFNC and ventilators have stopped working in several hospitals. The situation is getting worse by the day.” District chief medical officer of Agra district, Dr RC Pandey, said, “We are doing what we can, as we see to it that hospitals have enough (of oxygen). Supply has not stopped, but isn’t keeping up with the high demand. Over 10 teams are working to close the gap.”

The Agra health department reported 11 Covid-19 deaths in the past 24 hours, a figure that many said was an understatement.