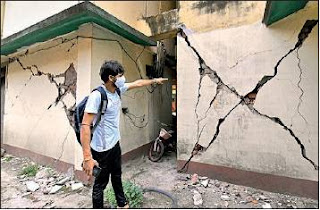 A powerful earthquake measuring 6.4 on the Richter Scale jolted Assam and other parts of northeast on Wednesday while six aftershocks were recorded in the hours after the first quake which shook up Sonitpur in northern Assam at 7.51 am on Wednesday.

According to the National Centre for Seismology, the tremors were felt even in North Bengal and other parts of the northeastern states.

According to the disaster management officials in Guwahati, there are reports of damages of buildings and roads in different parts of Sonitpur, Tezpur, Nagaon and adjoining areas but the detailed reports are awaited.

NCS data said that after the first quake, six aftershocks of magnitude 3.2 to 4.7 on the Richter Scale were recorded over the next 2 hours 47 minutes in the vicinity of Sonitpur and Nagaon districts. Successive earthquakes in the mountainous northeastern states, especially in Assam, Mizoram and Manipur have the authorities worried. Seismologists consider the mountainous northeastern region as the sixth most earthquake-prone belt in the world.