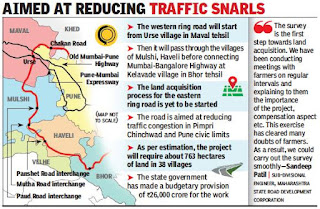 The Maharashtra State Road Development Corporation recently completed the joint measurement survey of 100 hectares of land in four villages — one in in Haveli and three in Mulshi tehsil — for the proposed 68.8km western ring road passing through Maval, Mulshi, Haveli and Bhor tehsils.

Sandeep Patil, the sub-divisional engineer of the Maharashtra State Road Development Corporation said, “The survey is the first step towards land acquisition. We have been conducting meetings with farmers on regular intervals and explaining to them the importance of the project, compensation aspect, etc. This exercise has cleared many doubts of farmers. As a result, we could carry out the survey smoothly.”

"We have made a comprehensive presentation, which is being shown during meetings with farmers. The compensation will be given on the lines of the Samruddhi expressway project," said a senior MSRDC official.

During the survey, a team of officials from the MSRDC and land acquisition department recorded condition of the land and existing properties in the form of well, house, trees, among others.

“Based on our findings and three years’ land deals, the state town planning department would decide the compensation amount for the farmers. Since the survey is done under camera, there wouldn’t be any confusion in future,” added Patil.

The road /project, as per the estimation, requires about 763 hectares of land in 38 villages of these tehsils. The state government has already approved the project and made a budgetary provision of Rs.26,000 crore for the work.

The Western ring road will start from Urse village in Maval thesil, then it will go through villages of Mulshi, Haveli before connecting Mumbai-Bangalore highway at Kelavade village in Bhor tehsil.

The land acquisition process for the eastern ring road is yet to be started. The road is aimed at reducing traffic congestion in Pimpri Chinchwad and Pune civic limits.