NV Ramana sworn in as 48th Chief Justice of India 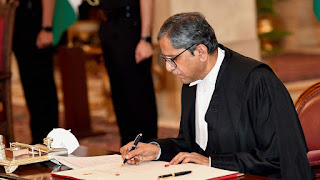 Justice Nuthalapati Venkata Ramana was sworn in as the 48th Chief Justice of India by President Ram Nath Kovind on Saturday.

He took the oath at a ceremony held at Rashtrapati Bhavan. Vice President M Venkaiah Naidu, Prime Minister Narendra Modi and Law Minister Ravi Shankar Prasad were among those present.

Justice Ramana took the oath in English in the name of God. After the swearing in, President Kovind congratulated Justice Ramana and extended him best wishes for a successful tenure. Justice Ramana was appointed as the chief justice of India on April 6.