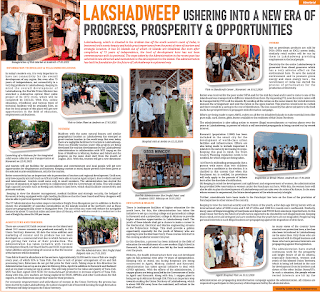 Lakshadweep collector S Asker Ali said the administration's recent decisions, which have invited protests, are aimed at bringing development to the islands. He dismissed the protests as part of a misinformation campaign by vested interests.

Ali told a news conference here that the level of development in the islands had not been commensurate with its potential. "Maldives, which has a similar geographical location and natural beauty as Lakshadweep, has emerged as a great tourism location in the world map. But even today, there are negligible facilities for tourism in Lakshadweep," he said.

Three eco-friendly tourism water villa projects are being developed by the Lakshadweep administration in collaboration with NITI Aayog on the lines of Maldives in Minicoy, Kadmat and Suheli, the work for which will start in August 2021, he said.

Ali said there was a misleading propaganda that a person with more than two children cannot contest to the gram panchayat. “This will not have a retrospective effect. It is a progressive legislation. The majority of families in Lakshadweep has only two children; it is an encouragement for proper family planning,” he said, and added that it would also help in women empowerment.

On the proposed beef ban, the collector said many states in the country had enacted cow protection laws. “Only those associated with its illegal business and those with personal interests are opposing this proposal," he said. Fish was substituted as a nonvegetarian item in students' meals as it is more available in the islands and will be helpful to fishermen, Ali said.

Justifying the proposed detention law, the collector said 300kg heroin, five AK47 rifles and 1,000 live rounds were seized from near the islands a few days ago. The seizure didnt have a direct connection with the islands but it calls for caution. Cases of smuggling of marijuana and liquor and Pocso cases have also been reported. Lakshadweep has been peaceful so far but compromises cannot be made on that basis, he said, adding that the islands are critical from a strategic and security point of view.

Tourism projects provide facilities for tourists and employment and business opportunities for local people. “Liquor permits have been given at select tourist establishments, that too only for tourists,” Ali said. The decision to open liquor shops in the islands had faced opposition for reportedly not respecting the cultural choices of Muslims, who constitute 96.58% of the population.

The collector said the UT administration decided to introduce freight from Mangalore port in addition to Kochi to ensure availability of essential commodities on the islands at the northern end. “The use of this sea route will reduce the navigable distance by about 75 nautical miles and save time by nine hours, which will also result in a reduction in the cost of freight by about Rs 200/tonne," he said.

Ali said the decision to lift the Covid restrictions was a policy decision as the islands had to be opened at some point. “In the last five months, over 1,18,825 persons have travelled from mainland to the islands and between the islands. As many as 300 cargo vessels have come to the islands. Around 1,000 tourists visited the islands in five months. The revision of the SOP helped economic activity as well,” he said.

The Covid situation is under control and 23 of the 26 persons who succumbed to Covid in the islands had comorbidities. He said the administration has enough stock of vaccines to inoculate the entire population with at least the first dose. On people laid off, Ali said they were employees who were hired for additional work. “These are additional workers hired as per demand. Once the work requirement is over, they move on to find other work. This is a routine procedure," he said. The collector said the Union government had initiated privatisation of electricity generation to promote green and clean energy here as the electricity for the entire Lakshadweep is now generated from diesel generators.

He said the ration for poor used to come to one of the islands and was transported to various islands from there. “Now the ration will be transported by FCI to all islands. Those with vested interests misused the earlier arrangement and sold the ration in open market. This practice will be restricted now; also, there will be a saving in the cost of distribution," he said.

Ali also justified the removal of illegal encroachments at various places. He said the administration has started widening the Agatti airstrip in collaboration with the Union government to promote tourism. Various projects are also being implemented to promote coconut farming and tuna fishing.

An initiative has already been launched to make Lakshadweep the nation's largest hub of seaweed farming by forming women selfhelp groups. He said besides a project to make Lakshadweep self-reliant in the field of health, there are efforts to open Amul outlets on all the10 inhabited islands.