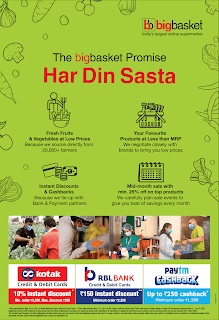 Tata Digital said it has acquired a majority stake in online grocery BigBasket, a deal that pits the country’s largest conglomerate against entrenched ecommerce players. The digital unit of the salt-to-software group didn’t disclose financial details of the deal.

Regulatory filings showed that it has acquired around 64% stake in Supermarket Grocery Supplies that owns BigBasket.

BigBasket board had approved the deal earlier this week and Tata Digital has infused primary capital of $200 million in the e-grocer at a post-money valuation of $2 billion.

China’s Alibaba Group and Actis LLP have now exited the Bengaluru-based company. The deal was cleared by the Competition Commission of India in late April.

“Grocery is one of the largest components of an individual’s consumption basket in India, and Big-Basket, as India’s largest e-grocery player, fits perfectly with our vision of creating a large consumer digital ecosystem,” Pratik Pal, chief executive officer of Tata Digital, said in a statement on Friday.

Hari Menon, BigBasket’s cofounder, said the company was “extremely excited” about its future as part of Tata Group. “As a part of the Tata ecosystem, we would be able to build stronger consumer connect and accelerate our journey,” he said in the statement.