In West Bengal, more than three lakh homes were destroyed and one crore people affected as sea water along the coast and rivers started swelling and breached embankments, a little after Cyclone Yaas made landfall in Odisha. The only life lost was that of a fisherman, who had ventured out to sea, ignoring warnings. East and West Midnapore and North and South 24 Parganas were the worst hit.

Kolkata and Bhubaneswar airports resumed operations on Wednesday evening. Airports in Bihar and Jharkhand will remain on alert.

At 9.30am on Wednesday, the very severe cyclonic storm made landfall with a wind speed of around 130-140kmph, less than the anticipated 150-165kmph.

The Odisha government has now turned its attention to prevent the spread of Covid-19 among the six lakh people it had evacuated to cyclone shelters after screening their health. Odisha CM Naveen Patnaik announced seven days’ relief for all families of 128 marooned villages in the cyclone affected districts.

An alert was sounded regarding possible flood in Budhabalanga and Subarnarekha rivers as torrential rain continued in Similipal area in Mayurbhanj as the cyclone progressed towards Jharkhand. The IMD has predicted extremely heavy rainfall in at least seven districts in Odisha.

NDRF, ODRAF and Odisha Police personnel continued restoration work even before the storm was over by cutting down fallen branches of trees to ensure road connectivity. State capital Bhubaneswar and pilgrim town Puri were largely spared by the cyclone with no significant impact on life and property. The Bhitarkanika National Park in Kendrapada district, known as the country’s second largest mangrove forest, has been seriously affected by the cyclone. 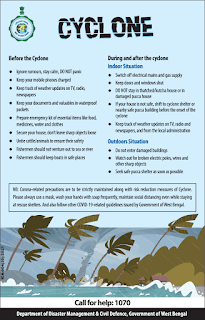