Delhi has most Covid cases & deaths per million population 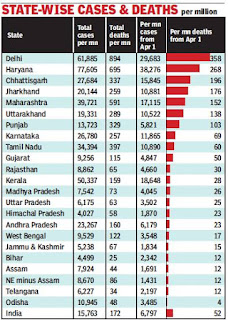 Of course, Delhi being a completely urban territory, the comparison with states can be misleading since the disease remains much more of an urban phenomenon than a rural one. Following Delhi in terms of deaths per million from April onwards is Chhattisgarh with Maharashtra not too far behind.

If we consider all deaths so far, the two states flip positions. Uttarakhand, which has been less in the headlines, and Punjab round off the top five in terms of deaths per million since the beginning of April.

Kerala has the second highest ratio of cases per million, behind Maharashtra on the all time list and behind Delhi for the period since April 1, but its very low fatality rate means that in terms of deaths per million, it is way down in the list. Tamil Nadu to a lesser extent follows the same pattern.

This analysis is based on official data on cases and deaths and hence may be understating the ratios to the extent that these are being undercounted. That also means that states in which there is less of undercounting will show up comparatively worse than those where the problem is more acute.

The period since the beginning of April has accounted for 43% of total cases and 30% of all deaths in just over a month, a measure of how severe the second wave of the pandemic in India has been. As the graphic shows, several of the smaller states like Uttarakhand and Himachal Pradesh are among the worst hit in this wave viewed in proportion to their populations.

In Jharkhand (68%) and Chhattisgarh (58%) over half of deaths too have come during this period while in Bihar, Rajasthan, Gujarat and Uttarakhand over 40% of all deaths have been in this five week period.