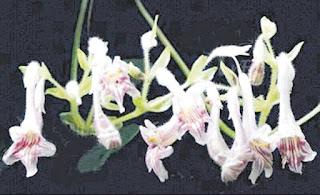 A group of botanists from the Bhopal-based Indian Institute of Science Education and Research have recently discovered a new species of plant belonging to the African Violets family from Mizoram and adjacent areas in Myanmar.

IISER sources said that there are 106 currently known species of this (African Violets) genus, of which 26 are present in northeastern states of India.

Didymocarpus is a genus belonging to the plant family Gesneriaceae (commonly known as African Violets) and its members are distributed from Western Himalayas to Sumatra. Most of these species are narrow endemics and require specialised habitats to survive, thus acting as an indicator of pristine habitats.

Highlighting the importance of Research IISER's Associate Professor (Department of Biological Sciences) Vinita Gowda said: "Beyond the academic desire to document biodiversity, finding the missing pieces' of the biodiversity puzzle are important in designing conservation approaches to protect the fragile ecosystem of such hotspots."

Newly described species Didymocarpus vickifunkiae (Gesneriaceae) is currently known from only three locations in Mizoram and considered as an endangered species.

The IISER scientists said that because of its complex geology and climatic conditions, northeast India is home to a diverse flora and fauna. However, much of it remains poorly documented.

Gowda said that the biodiversity in the northeastern region of India is poorly known due to low priority in research, inaccessibility and remoteness, challenges that are being tackled by research groups such as the TrEE lab (Tropical Ecology and Evolution lab).