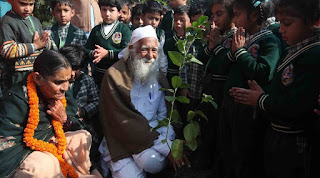 Noted environmentalist Sunderlal Bahuguna, synonymous with the Chipko movement, on Friday passed away due to COVID-19 at the age of 94.

He was under treatment at AIIMS Rishikesh and was admitted to the hospital on May 8 after testing positive for COVID-19. Bahuguna had been critical since last night and with his oxygen levels dropping, he was shifted to the ICU.

He breathed his last at 12.05 pm on Friday, informed AIIMS director Ravikant.

In his condolence message, Prime Minister Narendera Modi tweeted: “Passing away of Shri Sunderlal Bahuguna Ji is a monumental loss for our nation. He manifested our centuries old ethos of living in harmony with nature. His simplicity and spirit of compassion will never be forgotten. My thoughts are with his family and many admirers. Om Shanti.”

Uttarakhand Chief Minister Tirath Singh Rawat said “It as a big loss,as he (Bahuguna) made Chipko a movement of the masses.” Bahuguna was a dedicated environmentalist best remembered for spearheading the Chipko movement.

He had been fighting for the preservation of forests in the Himalayas, first as a leader of the Chipko movement and later led the anti-Tehri Dam movement a decade later.

Bahuguna was born in Maroda near Tehri, Uttarakhand in 1927. He fought against untouchability and later started organising women from the state in anti-liquor drives from 1965 to 1970.

He adopted Gandhian principles and walked through Himalayan forests covering more than 4,700 km and observed the damage done by mega developmental projects on the fragile eco-system of the Himalayas and subsequent degradation of social life in villages.