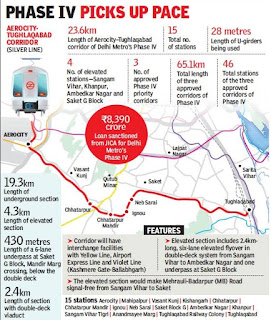 Delhi Metro Rail Corporation is soon going to start work on the construction of the underground section of its upcoming Silver Line— the Aerocity-Tughlaqabad corridor.

DMRC received a loan from Japan International Cooperation Agency recently and it has come as a boost for the Phase IV project. “Three major tenders of DMRC Phase IV’s underground sections have been recently floated. These are all being funded by the loan received through JICA. All the three tenders floated so far are for the Aerocity–Tughlaqabad Metro corridor,” a DMRC spokesperson said.

The spokesperson said that the loan agreement between the Government of India and JICA for sanction of loan for Delhi Metro’s Phase IV expansion was signed in March this year. “The amount sanctioned is Japanese Yen 1,19,978 million, which is equivalent to Rs. 8,390 crore approximately,” he said.

Out of the three approved corridors of Phase IV, work had first started on the longest corridor between Janakpuri West and RK Ashram Marg in 2019. Last year, DMRC shifted its focus completely to the smallest corridor—the 12.6 km long Majlis Park-Maujpur corridor. Work, however, has also been going on at the elevated section of the Aerocity-Tughlaqabad corridor, which features DMRC’s first double decker viaduct, which will have a 2.5 km long section between Ambedkar Nagar and Saket G Block stations with a road flyover on lower deck and metro viaduct on the upper deck.

The three new tenders floated by DMRC include a tender for construction of underground stations at Aerocity, Mahipalpur, Vasant Kunj and Kishangarh along with a tunnel through Tunnel Boring Machine. The total length of this section is about 6.1 km and the tender will be opened on June 1 this year, the spokesperson said.

The second tender is for the construction of Chattarpur, Chattarpur Mandir, IGNOU and Neb Sarai stations, along with tunnelling through TBM. The total length of this section is about 6.5 km and the tender will be opened on June 22 this year, he said.

The last tender is for a tunnel from Sangam Vihar to Sarita Vihar depot with construction of stations at Maa Anandmayee Marg, Tughlaqabad Railway Colony and Tughlaqabad. The total length of this section is about 4.2 km and this tender too will be opened on June 22.

“DMRC is currently engaged in carrying out construction on three priority corridors that have been approved as part of Phase IV, comprising 65.1 km with 46 stations,” he said.