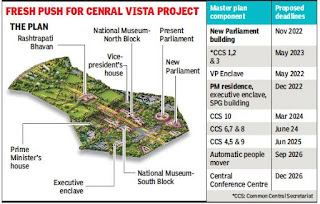 The Central Public Works Department has got the go ahead for construction of the proposed new Prime Minister’s House, adjoining an executive enclave and a SPG building on South Block side in the Central Vista area by December 2022.

The CPWD has proposed to complete the Vice President’s enclave close to North Block by May 2022. Though the go ahead from the environment ministry’s expert appraisal committee for the entire Central Vista redevelopment project, which includes the new Parliament Building, 10 buildings as part of a Common Central Secretariat and a massive conference centre, costing Rs13,450 crore came late last month, the minutes of the meeting were made public on Monday. After receiving the approval, the CPWD floated the tender for the first three CCS buildings.

The revised timeline has been questioned by a section of opinion which wants the project postponed since the country is battling the corona pandemic.

Officials, however, pointed out that there is no connection between the project and the nation's battle against the pandemic. The Prime Minister has been involved in consultations every day and dozens of decisions have been taken to augment medical facilities. Besides at a time of economic stress, causing distress to contractors, hundreds of professionals and labour involved in the project by shelving it did not seem a useful suggestion.

An official said the CPWD has proposed timelines when the application for green clearance was moved three-four months back. While the 2022 timelines have been set for PM House and VP House, the projects could take longer. Sources said work for the PM House, SPG building can start only when the hutments on Dalhousie Road are shifted to new buildings at Africa Avenue and KG Marg. These two buildings are not yet ready. Secondly, the PM House and SPG Buildings will have to be completely high-tech considering the security and strategic reasons.

Though the Centre is likely to float “confidential tender” for PM House and give the task on nomination rather than inviting an open tender considering strategic reasons, sources said the completion of these projects will take longer. The PM House and VP House will also have dedicated single lane tunnels connecting the Parliament.