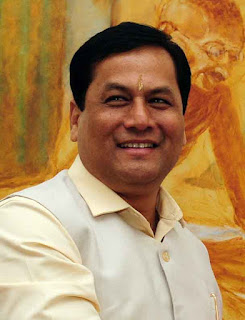 Sarbananda Sonowal signed off as Assam CM on Sunday with a quote from the Mahabharata, where Bhishma — lying on a bed of arrows — tells the eldest Pandava Yudhisthir that a king must stand for the country and not the other way round.

Addressing newly-elected MLAs of BJP and its allies after Himanta Biswa Sarma’s election as the leader of the House and the state’s next CM, Sonowal said, “So, we the representatives of the people, exist for society and the country. This we should keep in mind and always work in the interest of the country and society. Many of you here have worked with dedication in the last five years and so society has re-elected you. Respect the love and trust of society.”

Choosing to make a graceful exit, Sonowal drove to the assembly for the BJP legislature party meeting along with his successor. On reaching there, he waited for Sarma to alight from the other side of the vehicle before both walked into the assembly building together.

At the meeting, there seemed to be an uneasy calm till the proceedings began. It was Sonowal who proposed Sarma’s name as the leader of the legislature party. When it was time for the felicitation, Sonowal walked across the dais to present Sarma with a traditional gamocha (scarf) and patted him on the back before posing for pictures with an arm resting on his successor’s shoulder. Sarma took off his mask after a prod from Sonowal.

The outgoing CM expressed confidence that the new NDA government, under the leadership of his “younger brother”, would take the state to greater heights. “Himanta has been given a huge responsibility and I bestow my love and blessings on him so that he can perform his duties well for the welfare and progress of all sections of the society,” he said while addressing the newly elected members of all three alliance partners – BJP, AGP and UPPL.

Sonowal said that for the last five years, the BJP-led government in the state had been able to win the people’’s trust and confidence by bringing peace and development. “We thank the people for reposing their trust in us... I urge all the elected members of the alliance to work with dedication and honesty,” he said.