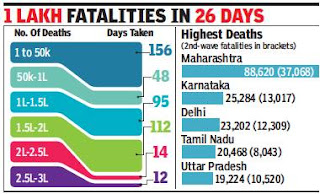 More than 3 lakh people have succumbed to Covid-19 in India’s official records. The toll from the pandemic crossed 3 lakh on Saturday, just 12 days after going past the 2.5 lakh mark.

India has recorded 1 lakh deaths from the virus in the past 26 days, becoming the only country in the world where the Covid toll, in terms of milestones of 50,000, has risen by 1,00,000 in under 30 days. At the height of its third wave in December-January, the death toll in the US had increased from 3.5 lakh to 4.5 lakh in 31 days, as per worldometers.info.

India has the third highest cumulative Covid deaths in the world after the US (over 6 lakh deaths) and Brazil (4.5 lakh). Deaths during the devastating second wave in the country now account for nearly half of all fatalities at 1.48 lakh in under three months since February15.

While the number of fresh cases has declined steadily after infections in the country peaked around May 8, the daily toll has not decreased by much. The seven day rolling average of daily cases was down 32% since the peak on May 8, when the average stood at over 3.91 lakh. On May 22, index was at 2.64 lakh.

By contrast, the seven-day average of daily deaths has dipped by just 5% since hitting a peak of 4,040 on May 16. It stood at 3,838 on May 22. For this calculation, “backdated” fatalities declared over the past few days in Maharashtra were not counted in the daily numbers. Maharashtra has recorded by far the highest number of Covid-related deaths in the country, with 88,620 fatalities so far. Maharashtra and Tamil Nadu are the only states, among five with the highest cumulative death toll, where second fatalities have been lower than those in the first wave.