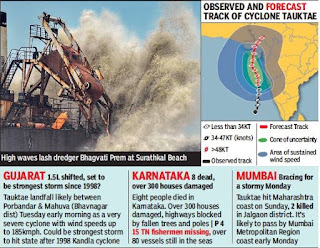 Covid-bruised Gujarat braced for a battering by the strongest cyclone to hit its coast since 1998 as Tauktae, which cut a swathe through the western coastal belt on Sunday and intensified into a “very severe” cyclonic storm, raced towards its predicted landfall between the UT of Diu and Mahuva in Bhavnagar early Tuesday.

Tauktae — Myanmarese for “gecko” — is estimated to arrive with wind speeds of 155-165 kmph, gusting up to 185kmph, the IMD said. It is tipped to reach the Gujarat coast on Monday evening and cross the areas between Porbandar and Mahuva by dawn the next day.

The major impact of the projected landfall will be felt in Porbandar, Amreli, Junagarh, Gir Somnath, Botad and Bhavnagar districts. “Damage is also expected in Devbhoomi Dwarka, Kutch, Jamnagar, Rajkot and Morbi, Valsad, Surat, Vadodara, Bharuch, Navsari, Anand and Ahmedabad districts,” IMD director general M Mohapatra said. “The cyclonic system is being monitored by Doppler weather radar at Goa. The IMD will keep updating the movement of the cyclone.”

The state administration, in coordination with central agencies, aims to evacuate close to 1.5 lakh people living in the coastal villages of Saurashtra and Kutch by Monday evening. Chief minister Vijay Rupani said, “With the aim of zero human casualty, 44 NDRF teams, assisted by SDRF and fire brigade personnel, have been deployed along coastal areas for rescue and relief work.”

Additional chief secretary Pankaj Kumar said on Sunday that 25,000 people had already been moved to safer places. The IMD warned of a storm surge of about 3m above astronomical tide over Amreli, Gir Somnath, Diu, Bhavnagar, 2-3m over Bharuch, Anand and the southern parts of Ahmedabad, and 1-2 m over Surat, Navsari and Valsad, and .5-1m in the remaining coastal districts.