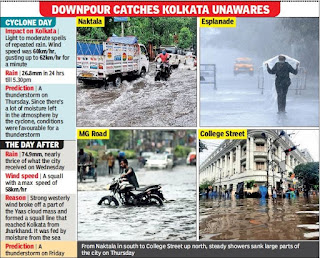 If Kolkata received moderate and sporadic showers during the cyclone on Wednesday, it was drenched by a surprise and unforeseen deluge a day after Yaas — now reduced to a depression — had travelled 400km away from the city.

A breakaway cloud mass from the cyclone that had struck on Wednesday and wreaked havoc in Odisha and caused substantial damage in Bengal led to incessant rain in Kolkata on Thursday. The city received 74.9mm rain till 5pm, nearly three times that of 26.8mm that it had received on the cyclone day. The torrential downpour was preceded by a morning squall that saw wind speed reach a maximum 58km/hr. Even as Kolkatans and weathermen expected it to be a passing cloud, the rain got heavier and more consistent, eventually continuing till the evening and left several parts of the city flooded.

A strong westerly wind cut away a portion of the cyclone cloud mass and formed a north-south squall line that stretched across Jharkhand to Kolkata, said weathermen. It was fed and strengthened by a heavy moisture incursion from Bay of Bengal. “So, we had a long and narrow squall line from Kolkata that passed through Digha, Nadia, Murshidabad and Malda. This was definitely a part of the Yaas cloud mass which triggered more rain in Kolkata nearly 24 hours after it had hit land 290km from the city,” said Regional Meteorological Centre director G K Das. He added that the length of the squall line was 250km.

The sudden extreme weather took even the weathermen by surprise. A thunderstorm had been predicted due to the residual moisture of the cyclone. “We had expected a few spells of rain that would peter off towards evening. But not a consistent shower like the one we had. The strong westerly wind, that helped to form the squall line, had not been expected. It resulted in Kolkata receiving more rain than that on Wednesday when the cyclone had struck,” said Das.

For Kolkatans, there will be no immediate respite from the wet weather. A thunderstorm has again been predicted due to the high moisture prevalence in the region. “If the temperature rises in the second half of the day, we may again have rain and wind on Friday,” said Das.

Meanwhile, Yaas remained stationed over south Jharkhand as a depression. It moved slowly towards the north at a speed of 9 km/hr for six hours on Thursday. It is likely to weaken into a well-marked low pressure area early on Friday.