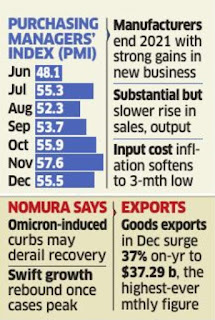 India ended 2021 on a strong note with manufacturing remaining robust in December and business activity firming up further at the end of the month.

Commerce and industry minister Piyush Goyal said India’s exports of goods will be above $400 billion this fiscal as outbound shipments during April-December crossed $300 billion, exceeding the exports of 2020-21.

India clocked $103 billion of exports in the October-December quarter, the highest till date.

The IHS Markit India Manufacturing Purchasing Managers’ Index eased to 55. 5 in December from November's 10-month high of 57. 6 but remained firmly in the growth zone. A reading above 50 indicates expansion. The separately released Nomura India Business Resumption Index, which tracks post-Covid business resumption, inched up to an all-time high of 120. 3 for the week ended January 2 from an upward revised120. 2 during the prior week (119. 8 previously).

The core sector grew 3.1% year-on-year in December supported by growth in coal and refining activity. Goods and services tax collections rose 13%to ₹1.29 lakh crore in December. Passenger vehicle sales grew 27% in 2021 to 3.08 million units despite chip and component shortages.

“The manufacturing PMI stayed above 50 for the sixth straight month, but the surge in Covid cases and mild tightening of restrictions add to uncertainty in the new year,” said Rahul Bajoria, chief India economist, Barclays.