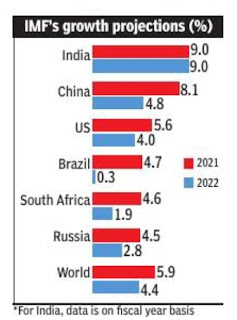 India’s economy is estimated to grow by 9% in the current fiscal year, a tad slower than the International Monetary Fund’s earlier forecast of 9. 5% due to the impact of the third Covid wave.

India will retain its tag as the fastest growing major global economy. IMF’s forecast for 2021-22 is slightly lower than the 9. 2% growth projected by the National Statistical Office. The Reserve Bank of India has estimated the economy to grow by 9. 5% in 2021-22.

The economy has been on a recovery path after the impact of the world’s strictest lockdown, which led to a 7. 3% contraction. The spread of the Omicron variant has prompted states to impose curbs, which has hurt several sectors of the economy particularly the contact-intensive services sectors. But most experts acknowledge that the impact of the third wave on the economy would be muted.