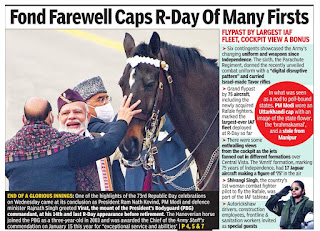 The 1971 operations to liberate Bangladesh found centre stage at the Republic Day parade on Wednesday, where a first of its kind flying display to denote the 75th anniversary of Independence was also there.

The ceremony was marked by several firsts, which commenced with Prime Minister Narendra Modi visiting the National War Memorial at India Gate. The pandemic limited the audience but there were new elements like cockpit videos during the flypast and equipment to reflect past operations.

Soldiers of the J&K Light Regiment donned uniforms worn during 1971 and carried the 7. 62mm self-loading rifle. The flypast included a vintage Dakota aircraft used in the Tangail airdrop in 1971that led to the fall of Dhaka, the turning point of the war.

Another first for the parade was a ‘past to present’ theme to the marching contingents that showcased evolution of uniforms and equipment of the Indian Army in the past 75 years. This included a contingent of the Rajput Regiment donning the 1947 uniform and carrying vintage . 303 rifle. The Assam Regiment was in its 1962 uniform while the Sikh Light Regiment and the Army Ordnance Corps were in present day uniform. The Parachute Regiment donned the new combat uniform of Indian Ar my unveiled earlierthis month.

The march past included the erstwhile Gwalior Lancers (now 61 Cavalry), the only active serving horse cavalry regiment in the world. Vintage equipment like the P 76 and Centurion tanks, Tiger Cat missile system and BMP 1 armoured fighting vehicle were on display too. The Naval contingent was led by a woman officer and its tableau depicted the uprising of 1946, Make in India initiatives since1983 and models of the new Vikrant aircraft carrier and the Naval version of the light combat aircraft.

The air force had models of the light combat helicopter and the Rafale fighter jets but the highlight was a large flypast that consisted of 75 aircraft, including a formation of the Jaguar land attack fighters that symbolised the number 75 with a tight formation. The parade also saw for the first time visuals from the cockpits of participating aircraft that gave a birds eye view of Rajpath and central Delhi.