Chennai: Elevated metro line on OMR to run parallel to proposed IT expressway 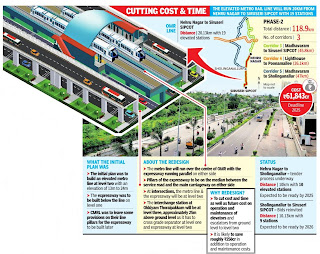 In a few years, when you take a metro train to your office on OMR chances are you will see your boss or a colleague zipping along in their car on a road alongside. Chennai Metro Rail Limited has redesigned the elevated metro rail line to run parallel to the proposed elevated IT Expressway to reduce construction and operational cost and build the line faster.

The metro rail line will run 20km from Nehru Nagar to Siruseri Sipcot with 19 stations. The redesign, approved by the government, is expected to reduce construction cost by approximately ₹250 crore in addition to the operational cost. Work on the 118. 9km phase-2 is expected to be completed around 2025.

“Our work on OMR will commence soon. But we do not know when the elevated expressway will become operational. If we are going to be on level two, future operational cost which includes elevators and escalators will be very high. So, we have redesigned metro corridor,” a top CMRL official said.

While the 10km stretch from Nehru Nagar to Sholinganallur is expected to be ready along with most elevated stretches of phase-2 in 2025, the line from Sholinganallur to Siruseri Sipcot may be ready within a gap of a few months depending on the contractor’s efficiency.

The new line will still be a roller coaster ride for commuters as it would start at 15m from the road level, reaching a maximum height of 25m. The redesigned metro line will be in the centre of OMR with a minimum height of 12m to 15m starting from Nehru Park. The Expressway will run either side of this corridor. “The columns will be around 1. 2m diameter. So, the width of the service road on OMR will not be affected by the elevated expressway. ”

When phase-2 was initiated, CMRL designed an elevated corridor on OMR that was to run on level two above the planned vehicular expressway on level one. The plan was to leave some provisions for the Expressway to be built later. “With the new design, we can complete our corridor and Expressway can be built any time,” the official said.

Experts say the Expressway may still bring more vehicles on the road. “But if CMRL provides good first mile and last mile connectivity on the entire stretch, it will encourage car and bike users to park vehicles at metro stations and take trains to work,” said Sivasubramaniam Jayaraman of the Institute for Transportation and Development Policy.