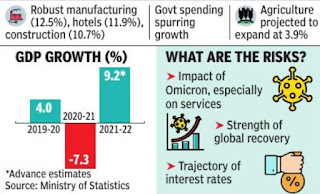 The Indian economy is projected to grow by 9. 2% during the current fiscal, helped by a robust farm sector and strengthening recovery in manufacturing, construction and services sectors. However, economists warned of a possible adverse impact of the third wave of Covid-19 in the months ahead.

This would be the fastest expansion since 1988-89, when the economy had expanded by 9. 6%, and comes on the back of a 7. 3% contraction during the last financial year when growth had collapsed due to the impact of the Covid-19 pandemic.

This would also be the fastest growth under the new methodology, data for which is available for 17 years. The data showed nearly all sectors barring trade, hotels, transport, communication and services related to broadcasting reach the pre-pandemic level.

This projected growth rate would also help India retain the fastest-growing major economy tag. The economy has recovered after the bruising impact of the strict nationwide lockdown imposed to prevent the spread of the coronavirus had led to a record 24. 4% contraction during April-June 2020.

The nominal GDP growth, including inflation, is estimated at 17.6%, according to the advance estimates released by the National Statistical Office on Friday. According to SBI research this is the second highest nominal growth since 19.9% nominal growth in 2010-11 and 17.1% in 2006-07. The size of the economy based on current prices in dollar terms is estimated to be $3.1trillion.

The NSO’s GDP estimates are marginally lower than the Reserve Bank of India’s projection. The central bank had estimated the economy to grow by 9.5% and the International Monetary Fund also expects it to expand on similar lines. The government had budgeted for a double-digit growth during the current financial year. But the third wave led by the Omicron variant has cast a shadow on growth and the strength of the recovery. Several economists have trimmed their growth estimates for the full year and expect the curbs being imposed by states to impact businesses and overall growth. The NSO also cautioned that the 9.2% GDP growth estimate in the first advance estimates does not take into account a number of factors and impact of government measures could lead to revisions.

“However, these are early projections for 2021-22. Actual performance of various indicators, actual tax collections and expenditure incurred on subsidies in the following months, fresh relief measures for the vulnerable sections (such as providing free food grains which has now been extended till March 2022) and other measures, if any, taken by the government to contain the spread of Covid-19 would have a breaking on subsequent revisions of these estimates,” the NSO said. The Indian economy has staged a sharp recovery after the second wave and several indicators had reached their pre-pandemic level aided by measures taken by the government and the RBI.