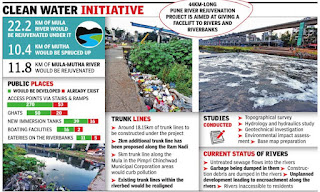 The agonising wait is over. The “Pune River Rejuvenation Project” ball is set to roll in around two months’ time.

Five bidders have come forward to work on the Sangam Bridge to Bundgarden stretch of the 44km-long project, five years after its declaration. The Pune Municipal Corporation plans to spend around Rs.360 crore on reviving the riverfront in the heart of the city, designed on the lines of Sabarmati riverfront development project in Ahmedabad.

The tenders for the first phase work, stretching about 4km, were floated in October last year. The pre-bid meeting was conducted on January 10. “The five bidders would be judged based on their documents and experience. Even the financial capacity and other factors would be checked before awarding the work,” said Yuvraj Deshmukh, a senior PMC official coordinating the project, adding that the work was expected to start on the ground-level by February-end or March.

According to the tenders, the first phase of the river rejuvenation project entails beautification of the riverbanks from Sangam Ghat to Bundgarden, laying cycle tracks along the river and facelift of Naik Island. A boating activity has been proposed in this phase, besides developing greenery along the cycle tracks to maintain the temperature.

The 44km Mula-Mutha river rejuvenation project has been divided into 11 phases. Over 32km of it would be developed in the first four stages on public-private partnership. The tenders for the Rs.650 crore second phase of the project between Bundgarden and Mundhwa would be opened in February.

The river rejuvenation project, if executed in letter and spirit, could be a befitting response to Puneites’ repeated petitions for neat and clean riverbanks.

According to the PMC officials, the rejuvenation project proposes to protect low-lying areas along the river from flooding by building a variety of well-modulated embankments along the banks. “The project promises to reduce the impact of indiscriminately built obstructions such as bridges, causeways, weirs and check dams on the flow of water by removing, streamlining, remodelling or rebuilding them. It will help reduce urban areas’ flooding,” said a civic official.

A senior PMC official said one of the objectives of the river rejuvenation project was to stop the sewage from flowing directly into the rivers. Interceptor sewers would divert the sewage to the nearest sewage treatment plant, he said.

He said a network of gardens, open spaces and public promenades would preserve the natural environment along the rivers. “Embankments will create a continuous public realm. They will make movement of people easier along the riverbanks,” he said.