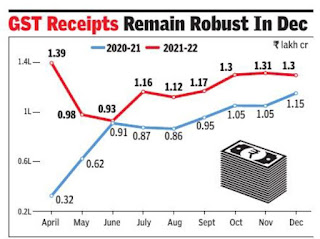 Gross GST receipts stayed above the Rs 1 lakh crore mark for the sixth consecutive month in December on the back of the strengthening economic recovery and anti-evasion measures unveiled by the government.

The GST collection in the month is close to Rs 1. 30 lakh crore despite reduction of 17% in the number of e-way bills generated in November (6. 1 crore) as compared to October, 2021 (7. 4 crore) due to improved tax compliance and better tax administration by both central and state tax authorities. The average monthly gross GST collection for the third quarter of the current year has been Rs 1. 30 lakh crore.