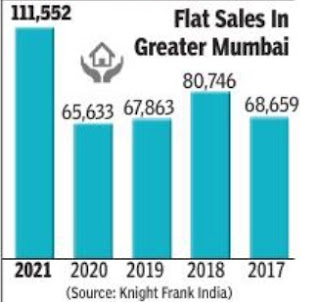 In 2021, Greater Mumbai recorded the highest apartment sales in a decade with total property registrations of 1. 1 lakh flats. This was 70% more than in the previous year and 45% higher than the pre-pandemic year of 2019, said a report.

The western suburbs (Bandra to Dahisar) were the most prominent market this year, according to property consultancy firm, Knight Frank India. Apartment sales contributed about 53% in this belt followed by the central suburbs with a sales contribution of 31% in 2021.

December 2021 also stood out to be the month with the fastest per day registrations in the last five months.

In December alone, the Mumbai market recorded registrations of 9,320 units, which is higher by 23% month-on-month. In comparison to the same period last year (December 2020) that had the lowest stamp duty rate, registrations were recorded to be lower by 52% year-on-year. December 2021 continues to maintain the strong sales momentum that has continued in the absence of any government sops,’’ it said.

The biggest demand was for flats worth Rs one crore and below. “Properties in price bracket under Rs one crore continue to dominate the market in December 2021 with a contribution of 53% to total sales. Those in the range of Rs one crore to Rs five crore amounted to 42% of the total sales. 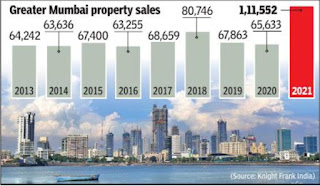