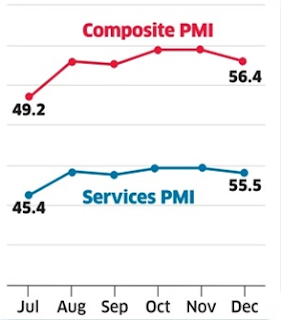 India’s services sector activity moderated to a three-month low in December as business activity and sales rose at a softer pace, while price pressures and the possibility of new waves of Covid-19 affected business sentiment.

Experts say restrictions imposed by states to contain the spread of covid could impact services sector in the coming months.

The seasonally adjusted India Services Business Activity Index fell to 55. 5 in December from 58. 1 in November.

A reading above 50 indicates expansion while below that shows contraction. Services activity increased for the fifth straight month in December.

On the employment front, the December data showed renewed job shedding in the service economy, but the rate of contraction was only slight. Firms generally suggested that employment levels were sufficient to cope with current workloads.

“2021 was another bumpy year for service providers, and growth took a modest step back in December. Still, the latest readings pointed to robust increases in sales and business activity compared to the survey trend,” said Pollyanna De Lima, Economics Associate Director at IHS Markit.

The rates of expansion moderated but were nevertheless marked by historical standards, according to the survey.

Moreover, owing to the buoyant performances seen in October and November, the average growth rate for output over the third quarter of fiscal 2021-22 was the strongest since the three months to March 2011, De Lima said. The December services survey was conducted between December 6 and 21, before covid cases started rising in India.

A few of India’s state governments have announced weekend lockdowns and night curfews to curb the spread of new covid infections, which may impede services activity in the coming months, Barclays said.

“As a result, the PMI may moderate further in the coming months,” said Rahul Bajoria, Chief India Economist, Barclays.

SBI business Activity Index is at its all-time high of 117. 3 for the week ended January 3 indicating the economic activity is not getting affected by the sudden bout of infections.

As per the IHS Markit survey report, the latest increase in new orders was centred on the domestic market, as new business from abroad fell further. The deterioration in international demand was linked to Covid-19 restrictions, particularly around travelling. Uncertainty surrounding the outlook, and a general lack of pressure on capacity, led to a renewed fall in employment during December.

“That said, the decline was marginal, and a recovery is expected this year should demand for services remain favourable,” De Lima said. Business confidence strengthened during December to a four-month high, but sentiment remained subdued in the context of historical data.

Some firms foresee further improvements in demand and expect marketing efforts to bear fruit. Others were concerned that the recovery could be dampened by price pressures and potential new waves of Covid-19. Inflationary pressures in the service economy showed signs of abating at the end of 2021, as both input costs and output charges rose at the slowest rates in three months.