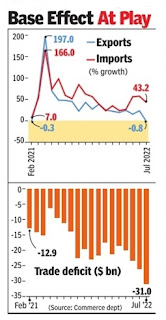 India’s exports dipped for the first time since February 2021 as some of the checks imposed by the government to increase domestic supply took a toll on shipments out of the country. This pushed up trade deficit to a new record of $31 billion in July.

Preliminary data released by the commerce department showed that exports fell 0.8% to $35. 2 billion, while imports soared 43% to $66.3 billion. The trade deficit in July eclipsed the earlier high of $26.2 billion, reported in the previous month. The growth in imports was high despite a 43% fall in gold imports as high energy prices pushed up petroleum (70% to $21 billion) and coal (165% to $5.2 billion) shipments.

In contrast, the windfall tax and other moves related to the petroleum sector are seen to have resulted in a 7% contraction in export of oil products to $5.4 billion even as the anti-inflationary measures in developed countries, which slowed down or are slipping into recession, took a toll on several other sectors. So, gems and jewellery (5% decline to $5.3 billion), engineering goods (2.5% to $9.3 billion), and textiles were among sectors that saw a fall in exports.

Economists also said that a base effect from last year was also at play. The government, however, did not appear unduly worried. “Exports of $156.4 billion in the first four months of the fiscal put us on track to achieve $470 billion in the current fiscal comfortably,” commerce secretary B V R Subrahmanyam said. Aditi Nayyar, chief economist at ratings agency ICRA, said, “Lower commodity prices should temper the trade deficit going ahead, although the strength of merchandise and services exports in the face of the global slowdown fears, remains crucial. Nevertheless, the sharp trade deficit in July 2022 does not augur well for the size of the current account deficit in Q2 FY23. ”