PMR: 32km of ring road work set to start after this monsoon 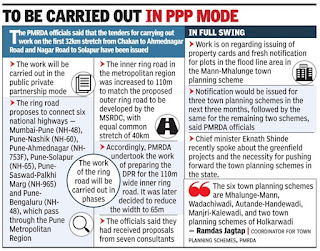 The Pune Metropolitan Region Development Authority will commence work on the 32km stretch of the ring road from Chakan to Nagar Road after the monsoon, PMRDA officials said. The work of the ring road will be carried out in phases. The ring road proposes to connect six national highways — Mumbai-Pune (NH-48), Pune-Nashik (NH-60), Pune-Ahmednagar (NH-753F), Pune-Solapur (NH-65), Pune-Saswad-Palkhi Marg (NH-965) and Pune-Bengaluru (NH-48), which pass through the Pune Metropolitan Region.

The Pune district authorities had proposed two ring roads to enable commuters to reach the national highways faster. A round 173km ring road is being implemented by the Maharashtra State Road Development Corporation and the other by the PMRDA. The previous Maha Vikas Aghadi government had decided to prioritise the MSRDC ring road.

The PMRDA officials said that the tenders for carrying out work on the first 32km stretch from Chakan to Ahmednagar Road and Nagar Road to Solapur have been issued and will be carried out in the Public Private Partnership mode. The revised detailed project report stated that the width of the ring road has been reduced from 110m to 65m. The officials said they had received proposals from seven consultants.

The inner ring road in the metropolitan region was increased to 110m to match the proposed outer ring road to be developed by the MSRDC, with equal common stretch of 40km. Accordingly, PMRDA undertook the work of preparing the DPR for the 110m wide inner ring road.

However, it was later decided to reduce the width to 65m for which a new agency will be appointed. The 40km common stretch has been handed over to the MSRDC for development, while the work on the 6.19km stretch from Wagholi to Lohegaon has already been undertaken. Thus, the new DPR will only be for the remaining 81.89km and the agency is expected to prepare a detailed plan based on the need of citizens. Last year, the state government had decided to reduce the width of the ring road of the PMRDA to 65m.

The decision taken by the state government will boost the work on the ring road, which has been stalled for the last few years, said officials