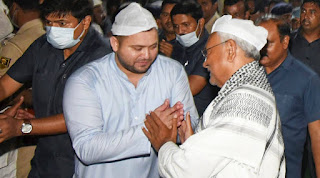 After submitting his resignation as chief minister to governor Phagu Chauhan on Tuesday, Nitish Kumar returned to the Raj Bhavan, this time with RJD leader Tejashwi Yadav, to stake claim to form a new government.

Both the leaders sat in one car to reach the Raj Bhavan. Besides them, JD-U leaders Rajiv Ranjan Singh alias Lalan Singh, Vijay Kumar Chaudhary, Shrawan Kumar and other leaders were also present.

Earlier, Nitish Kumar met the governor to submit his resignation and then straight away, went to Rabri Devi’s residence at 10 Circular Road to meet Tejashwi Yadav and other leaders of the Mahagathbandhan.

Nitish Kumar, who went to Raj Bhavan alone, announced his resignation to the waiting media after coming out. “I was the chief minister of Bihar. Now, I have given my resignation from the post of chief minister,” he said.

When asked about the dispute between him and BJP, he left the question unanswered.

Earlier, addressing a meeting of lawmakers of his Janata Dal-United, Nitish Kumar, sources said, levelled allegations against the BJP, saying it was conspiring against him and trying to influence JD-U MLAs to rebel against him.

Sources said that Nitish Kumar accused the BJP of ‘horse trading’ and giving some party leaders lucrative offers to make them ministers. He said that he has proof of this. Meanwhile, JD-U MLAs have been asked to stay inside CM’s residence.

JD(U) sources have said that the top leadership of the party has prepared a plan to expose the BJP as it has more than six audio recordings where its MLAs and a minister were given lucrative offers to rebel against Chief Minister Nitish Kumar.