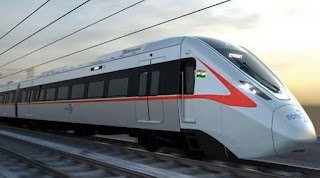 The first train-set made its maiden run on the RRTS corridor on Saturday, marking a milestone for the NCR transport corporation. The train set was fed by the recently charged 25kV traction system. NCRTC officials, including its managing director, were on board when the train moved out of the Duhai depot and travelled for half a kilometre. The officials said the train had met the prescribed standards.

The transport corporation now is gearing up for a trial on the 17km priority section between Sahibabad and Duhai, which is likely to be ready by March next year. “In July this year, NCRTC energised the overhead equipment on the 82km corridor at its Duhai depot with 25,000 volts. On Saturday, we achieved another milestone. Our first train set made its maiden run for about half a kilometre along the Duhai line. Senior officials of NCRTC, including managing director Vinay Kumar Singh, travelled on the train,” said Puneet Vats, the chief public relations officer at NCRTC.

“The test run met all the parameters and it was a success. We are confident that by October, we can start trials on the 17km priority section,” he added. During the trial run on Saturday, the newly commissioned long-term evolution communication was also tested.

It was in June this year that the first RRTS train set was brought from the manufacturing plant in Gujarat’s Savli to the Duhai depot, where it was assembled and made to go through static commissioning testing before the maiden run was initiated. Officials said that in the days to come, more such trial runs would be conducted in a calibrated manner.

The 82km RRTS corridor from Sarai Kale Khan to Meerut is being developed at an estimated cost of Rs 30,724 crore, of which the government’s share has been pegged at Rs 6,500 crore.  Of the total stretch, about 70km will be on elevated platforms while 12km will be underground. The stations in Delhi are Sarai Kale Khan Depot, Sarai Kale Khan, New Ashok Nagar and Anand Vihar. In Ghaziabad, they are Sahibabad, Ghaziabad, Guldhar, Duhai, Duhai Depot, Muradnagar, Modinagar (South) and Modinagar (North). Meerut (South), Shatabdi Nagar, Begulpul, Modipuram and Modipuram Depot will be in Meerut.