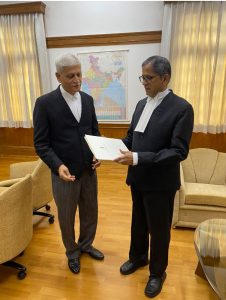 CJI-designate UU Lalit pointed out that justice eludes victims of triple talaq years after a law was brought in against the practice. “Take for example today’s news item saying even after five years, the victims are not getting justice. There has to be a throbbing system. ”

“Look at the civil side. Fruits of decree, got after years of litigation, eludes the decree-holder. There the system needs complete tuneup or complete revamp. We may lay down law. But, in the actual dispensation, what happens is there are many misses between the cup and the lip . On the positive side, the law which is getting laid down by the S C is of the highest order,” he said.

Asked why the SC repeatedly rules and espouses the right to equality for women and giving them their due, yet not facilitating appointment of adequate number of them as judges of the constitutional courts, the CJI-designate said the scenario would undergo a complete change in the next 10-15 years. “The number of women judges in the trial courts has risen substantially. For example, in Rajasthan, of the 190 candidates who underwent an induction programme as trial court judges recently, 129 were women. Similar is the story in Odisha and other states. These women judges would surely rise and become eligible for high court judgeship in 10-15 years,” he said.

Of the few women judges appointed to the SC, Justice Lalit said if one looks at the talent pool available for selection to the SC, say the 100 most senior HC judges, there are only few women among them. “So it would not be possible to select them, without their acquiring requisite seniority. But I’m very sure the scenario will undergo fast paced change in the next decade or half,” he said. There has been a lot of talk in the courtroom, especially when a SC judge retires, that given the rise in life expectancy level and the fitness of judges, their retirement age should be increased to 70 years. Attorney general K K Venugopal is a votary of increase in the S C judges’ retirement age. CJI-designate Lalit said whatever is the retirement age for judges, it should be identical for the SC and HC. At present, SC judges retire at 65 and HC judges at 62.

“Personally speaking, 65 is the appropriate age for retirement of a judge. We work under so much pressure. ”

“It is true life expectancy has increased and there is logic behind using the tried and tested pool of talent that ha s served the country well. But, if you increase the age limit, then it will block the chances of youngsters. That is equally good talent. So, if you increase the age of judges, then the sanctioned strength of the courts should also increase,” he said.