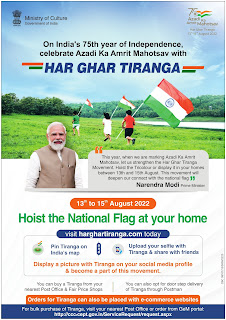 Prime Minister Narendra Modi suggested people to put the Tricolour as profile pictures on their social media accounts from August 2.

Addressing his monthly radio programme ‘Mann Ki Baat’, the Prime Minister said: “I have a suggestion that from August 2 to 15, all of us can place the Tricolor in our social media profile pictures. ”

He said that under the Azadi ka Amrit Mahotsav initiative, a programme called ‘Har Ghar Tiranga’ will be organised from August 13-15. “By becoming a part of this movement, from August 13 to 15, you must hoist the Tricolor at your residence, or adorn your home with it. The Tricolor connects us, inspires us to do something for the country,” he said.

The Prime Minister mentioned that August 2 has a special connection with the Tricolor. “This day is the birth anniversary of Pingali Venkaiah, who designed our national flag. I pay my respectful homage to him. I also remember the great revolutionary Madam Cama. Her role in shaping the Tricolor has been very important,” he said