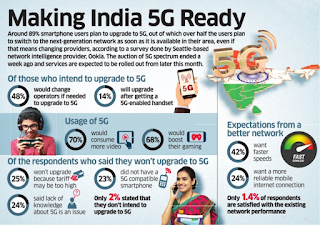 As India gears up to usher in the 5G era, 89 per cent of consumers wish to upgrade to 5G network in India while 48 per cent would upgrade to 5G even if it calls for switching service providers, a new report said. 5G adoption would boost video content streaming, gaming, and social messaging on smartphones.

Those that aren’t sure about the new technology will likely wait to see how attractive it is once others start using it. Only 2 per cent stated that they don’t intend to upgrade to 5G.

“While mobile users in India are among the most data-intensive users in the world, India’s 4G/LTE networks have become a bottleneck for demand,” said Sylwia Kechiche, principal analyst, enterprise at Ookla. “Now, that operators have acquired 5G spectrum, they start their race to become the first operators to go to market with 5G, with some already hinting that 5G deployments will begin in the next few months,” Kechiche added.

The findings showed that if mobile Internet connections were better, 70 per cent of respondents would increase their use of video streaming, while 68 per cent stated they would boost their mobile gaming.

Operators acquired a total of 44,960 MHz of spectrum in the 26 GHz spectrum band (mmWave), which due to its high throughput, is particularly useful for streaming and gaming. Nearly 42 per cent of respondents believe that faster speeds would most improve service currently being provided to them. The good news is that the operators’ spectrum holdings in the C-band will help them do just that, said the report.