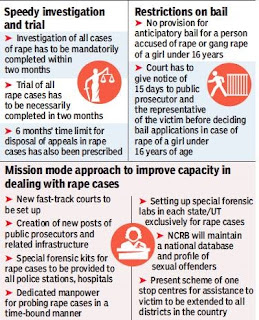 The Union Cabinet cleared a stringent ordinance providing for lengthy jail terms and even the death penalty for sex offenders convicted of raping girls below the age of 12 years while the punishment for the gang rape of a victim below 16 will be imprisonment for life.

The ordinance sets out life sentences for the entire natural life of a convict and rules out anticipatory bail for rape or gang rape of a girl less than 16 years while also providing a two-month time frame for investigation and the same for trial. The ordinance also outlines plans for specialised forensic labs and rape investigation kits for police stations to ensure evidence is gathered and analysed speedily.

The Cabinet met within hours of PM Modi’s return from a tour of Sweden and the UK and after he reviewed the Criminal Law (Amendment) Ordinance, 2018, intended to provide “effective deterrence” against the offence of rape and to instill a feeling of security among women and girls.

Official sources said the government took serious note of the incidents of rape in various parts of the country and framed a comprehensive response that includes tough sentences and timebound trials. The PM returned to Delhi around 8.30 am and the Cabinet met at 11.30 am to deliberate on the ordinance in the backdrop of nationwide outrage over the Kathua rape-murder of a minor.

The ordinance is the second occasion in recent years when laws on crimes against women have been scrutinised and sentences made tougher, after the rape-murder of a young physiotherapy student in Delhi in 2012. The ‘Nirbhaya case’ had led to the inclusion of specific offences and a review of sentencing.

The urgent meeting seems to have been prompted by criticism that crimes against women are rising and, in Kathua case, the perception that BJP was slow to dissociate itself from protests in support of the accused and that the case had been given a communal turn. The ordinance follows Modi’s comments that there should be no politics over rape.

The minimum punishment in case of rape of women has been increased from rigorous imprisonment of seven years to 10 years, extendable to life imprisonment. After Nirbhaya case, death sentence was included in cases of sexual assault where the victim dies or is reduced to a vegetative state.

The ordinance prescribes a six-month time limit for the disposal of appeals in rape cases and also puts restrictions on bail for the accused.

The IPC, Evidence Act, CrPC and POCSO Act will stand amended once the ordinance is promulgated after President Kovind’s approval. 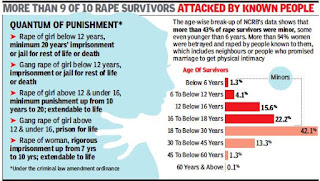