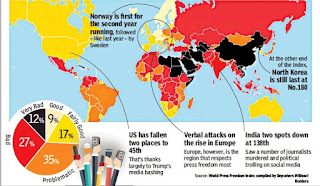 India's ranking in the Press Freedom Index has fallen two places to 138, Reporters Without Borders said in an annual report, blaming "physical violence" against journalists like Gauri Lankesh as the key reason behind the low ranking. Norway topped the list, with the world's freest press, for a second year in a row, while North Korea remained the most repressive in a ranking of 180 countries. The report warned that hate crime is another issue plaguing India. China's ranking remained unchanged at 175 for a second year. Press freedom around the world was under threat from a triple whammy of US President Donald Trump, Russia and China's bid to crush all dissent, RSF said. It warned that a "climate of hatred and animosity" towards journalists combined with growing attempts to control the media posed a "threat to democracies". Hostility towards the media was "no longer confined to authoritarian countries such as Turkey and Egypt", but was poisoning the political atmosphere in some of the great democracies, it added.