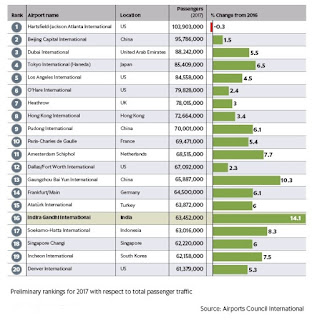 Robust air traffic growth at the capital’s Indira Gandhi International Airport has propelled it into the list of top 20 airports — in terms of passenger traffic — in 2017, displacing New York’s JFK Airport from the ranking.

The Indian aviation growth story does not end with Delhi. According to the Airports Council International, Kolkata, Hyderabad, Bangalore and Chennai were among the fastest growing airports in the world last year.

ACI — which is the trade association for the world’s airports — compiled the data for 2017 for 1,202 airports worldwide and India and China stand out for their growth. “Growing rapidly in a relatively short period of time, India is poised to be one of the largest aviation markets in the world in the years to come…. stronger economic fundamentals has helped awaken the Bengal tiger (Kolkata) to become one of the fastest growing markets in the world. ACI’s World Airport Traffic Forecasts predicts that the country will represent the third largest aviation market, in terms of passenger throughput, after the US and China by 2020,” ACI said while releasing its preliminary 2017 world airport traffic rankings.

“Delhi, the country’s busiest airport for passenger traffic, grew by 14.1% every year, pushing it up from 22nd to the 16th busiest airport in the world. Kolkata, Hyderabad, Bangalore and Chennai also ranked among the fastest growing airports in the world. Year-over-year growth of 26.9%, 19.6%, 12.9% and 10.5% (in these cities) respectively was achieved in 2017,” ACI added.

India’s has been the world’s fastest growing domestic air travel market globally with a double-digit growth consecutively in last 42 months (like January 2017 over January 2016).