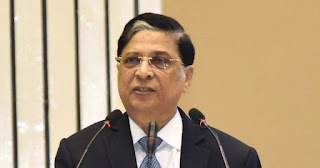 Seven Opposition parties, led by Congress, made an unprecedented move and submitted to Vice-President and Rajya Sabha Chairman M Venkaiah Naidu a notice to seek Chief Justice of India  Dipak Misra’s impeachment over a host of charges.  The notice will become a motion only when Naidu takes it up. An impeachment motion has never been moved against the CJI. Union Finance Minister Arun Jaitley hit back and said the move was a serious threat to judicial independence and an attempt to intimidate a judge.

In all, 71 Rajya Sabha MPs have signed the notice, but seven of them have retired. However, for any such motion to be moved in the Rajya Sabha, only 50 such signatures are needed. Such a motion can be moved even when Parliament is not in session.

At a press conference, Congress leaders said the parties had to move the notice with a “very heavy heart” because CJI Misra has not “asserted the independence of judiciary in the face of interference by the executive”.

“We wish this day had never come,” said Congress leader Kapil Sibal, referring to the office of the CJI as an “exalted position” that needs to be tested by the “highest standards of integrity” and must be above “suspicion”.

“As representatives of the people, we are entitled to hold the Chief Justice accountable just as we are accountable to the people. The majesty of the law is more important than the majesty of any office,” Sibal reasoned, acknowledging that choice was not easy, because either way, the repercussions are serious.

Jaitley said in blog post that the Opposition’s move is a serious threat to judicial independence. “It is a revenge petition after the falsehood of Congress in the Judge Loya case was established. It is an attempt to intimidate a Judge, and is a message to other judges that 50 MPs are enough for a revenge action,” he said.

The seed for the move was sown by the Left parties in January, a few days after four top most judges of the Supreme Court went public with the allegation that the Chief Justice was abusing his position as the “master of the roster”, allocating sensitive cases to junior judges.

It fructified a day after when a three-judge bench led by CJI Misra summarily dismissed pleas seeking a probe into the death of CBI judge BH Loya, who was dealing with the high-profile Sohrabuddin Sheikh fake encounter case in which current BJP president Amit Shah was an accused and was later cleared. 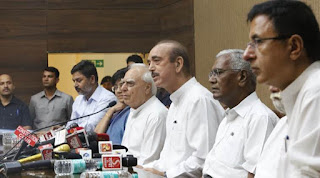