Mula-Mutha to be part of National Waterways plan 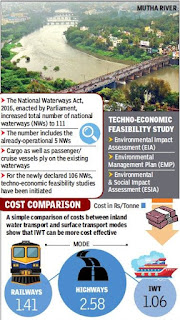 Pune city has been selected as one of the beneficiaries of the National Waterways project. The Mula-Mutha will be added to the list of rivers that are going to be part of this project. The amendment to the Union government’s proposal regarding it is expected in July.

Efforts to develop water transport system in the city will gather momentum with this nomination, said Anil Shirole, a member of Parliament.

Back in August 2017, Nitin Gadkari, the Union minister for road transport, highways and shipping, had urged the local leaders to apply for the nomination while chairing a public function in the city.

He said the nomination will help in providing a better alternative to city’s transport system. Other key projects such as the river rejuvenation and the riverfront development projects will work in sync with the National Waterways project.

As per the requirement for this project, draft of 3-metre depth and 35-metre width, which can be used throughout the year, would be developed. Nearly 30 to 35 dry ports can be built alongside the Mula-Mutha rivers.

The National Waterways Bill was introduced in Parliament in 2015 and was approved in 2016.