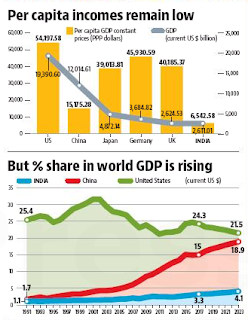 India’s Gross Domestic Product, the worth of the economy, clocked in at $2.6 trillion for 2017, according to the database of the International Monetary Fund’s World Economic Outlook for April 2018. That is well over the $2.5 trillion milestone that supposedly separates big economies from pretenders.

India is now the world’s sixth largest economy, displacing France. The five economies ahead are the US, China, Japan, Germany and the UK.

“This is a landmark development for India,” said an official in the finance ministry in New Delhi, and insisted that though it might look symbolic, implications were more far-reaching than immediately apparent.

“These horse races and their numbers matter and work to shape opinion, and more importantly we hope, influence investment decisions,” the official added. The ongoing spring meetings of the World Bank-IMF group have brought a steady stream of good news for India, with, it must be acknowledged, the necessary and repetitive caveats, admonitions and prescriptions, such as the dire need for reforms in labour laws (read allow easy exit for failing enterprises, a key trigger for innovation) and land acquisition.

Both the World Bank and IMF have said in their respective reports and projections that India has finally overcome the adverse impact of the predictably but needed measures to demonetise the economy and introduce a unified system of taxation for goods and services, no matter how disruptive they were.