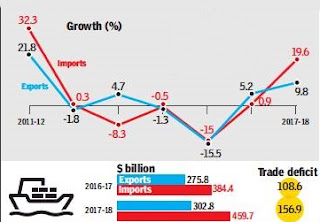 India’s exports rose 9.8% during 2017-18, the highest growth rate in six years, while imports went up nearly 20% as commodity prices pushed up the value of shipments in and out of the country along with a pick-up in global trade.

But, exports dipped 0.7% in March to $29.1 billion, led by a decline in shipments of gems and jewellery and petroleum products from the country. This was the first decline in four months as oil exports dropped 13%, while gems and jewellery exports fell nearly 17%. During March, import growth too slowed down, rising 7% to $42.8 billion, leaving a trade deficit of $13.7 billion.

While exporters’ lobby group Fieo said that the overall number was positive, it warned about the adverse impact of protectionism and geo-political uncertainty.