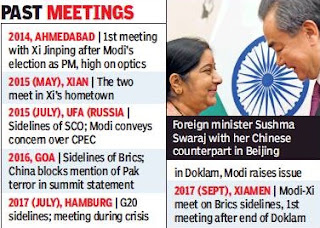 Prime Minister Narendra Modi and Chinese President Xi Jinping will hold their first major “informal summit” in the picturesque Wuhan city of central China on April 27 and 28, marking a breakthrough in ties that were hit by a tense 73-day standoff between Indian and Chinese militaries at Doklam.

The announcement of the meeting, though speculated upon in the last few weeks, is concrete evidence that the two leaders could be looking to impart some momentum to the relationship. The decision was made public after talks between visiting foreign minister Sushma Swaraj and her Chinese counterpart Wang Yi, and can lead to more purposeful discussion on the bilateral relationship.

Wang described the forthcoming Modi-Xi meeting as a “new starting point” in the relationship. He also referred to the importance of supporting the World Trade Organization mechanism, a hint at US President Donald Trump’s trade actions which China regards as a violation. This could possibly have aided the thaw with India.

The scheduled meeting, a culmination of a series of high-level exchanges between the two countries in the past few weeks, was described by officials on both sides as a milestone in the relationship which has been beset with difficulties in the recent past on a host of issues like Beijing’s determination to block India’s NSG membership bid and diplomatic, military and economic support to Pakistan.

The successful resolution of the Doklam standoff, despite bellicose statements from Chinese commentators and regrouping of PLA forces to the north, seems to have helped set the tone for a more result-oriented deliberation.

Interestingly, the possible reset of ties follows a successful visit to India by the new Nepal PM K P Sharma Oli, where the China factor played a role.

This will be the first major meeting between Modi and Xi after the faceoff in Doklam—disputed between China and Bhutan—where China sought to alter the status quo and build a road that could have given it a strategic advantage over the ‘chicken’s neck’ that connects India’s north-east to the rest of the country. The engagement will also mean back-to-back visits for Modi to China as he is scheduled to travel to the country again in June for the Shanghai Cooperation Organisation summit. Most events planned are one-on-one even though, as a source put it, the core delegation comprising officials in the MEA who handle China will travel with Modi. Speaking at a joint press conference with Wang, Swaraj indicated that the Modi-Xi meeting will cover border issues, among other things.

“While making efforts to progress our relations in diverse areas, we underlined that maintaining peace and tranquillity in the India-China border areas is an essential pre-requisite for the smooth development of bilateral ties,” Swaraj said.

China has been worried that India would make heavy weather of the issue of Pakistan-based terrorism at the SCO meeting, which will also be attended by Pakistani leaders after Modi recently described it as an “exporter of terrorism”.