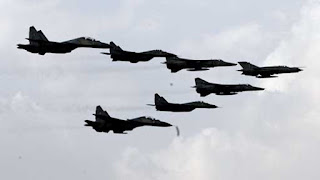 The Indian Air Force commenced its biggest ever combat war game exercise ‘Gagan Shakti’ from Sunday. The exercise will be on at Pokhran Firing Range in Jaisalmer for two weeks till April 22. Dummy targets at Pokhran Field Firing Range have been made and fighter aircraft are hitting the set targets. The exercise will speed up in next few days. Day and night exercises will be carried out in two phases – the first in the western part and second phase in north-east part. More than 1,100 fighter aircraft and 15,000 personnel are taking part in the exercise.

The Indian Air Force is organising this exercise to check its hitting power and also prepping up war preparations at borders shared with Pakistan and China. This is going to be a big boost for the ‘Make In India’ programme and will be a landmark for the indigenous aircraft development project.

A defence official said that an all encompassing coordinated and composite exercise is being conducted by the IAF. The aim of this exercise is real time coordination, deployment and employment of air power in a short and intense battle scenario. While it is an IAF-centric exercise, it is planned to be executed keeping in mind the ‘Joint Operational Doctrine’. The requirements of the other services are being met and the same has been factored while planning the exercise settings. Joint operations have also been planned.

This exercise is aimed at coordinating operations, maintenance and administrative responses to achieve the stated objectives of the Indian Air Force, in case of any contingency.