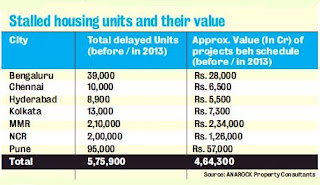 The government approved Rs.25,000 crore fund to help complete over 1,600 stalled housing projects, including ones declared bad loans or admitted for insolvency proceedings, as it looks to boost growth by steering consumption in real estate and associated sectors.

Continuing with steps she began announcing within a month of Parliament approving her maiden Budget, Finance Minister Nirmala Sitharaman said the Alternative Investment Fund will comprise Rs.10,000 crore coming from government and the remaining being provided by state insurer LIC and country’s largest lender SBI.

The AIF, which was first announced by Sitharaman on September 14, will act as a ‘special window’ to provide loans to over 1,600 incomplete affordable and middle-lower income housing projects.

In all, 4.58 lakh housing units are being targeted to be completed with a view to generate employment as well as revive demand of cement, iron and steel industries.

Sitharaman said the scheme, approved by the Union Cabinet headed by Prime Minister Narendra Modi, is a modified version of the September 14 plan.

The key change is allowing the AIF to fund projects that lenders may have declared as non-performing assets or which have been dragged to the NCLT for insolvency proceedings.

Welcoming the move, Niranjan Hiranandani, president, National Real Estate Development Council, an umbrella body of real estate developers, said, “These are positive steps and the government has made a good beginning.

However, this fund will not fully address the liquidity problem facing the sector. I would suggest that the government and the RBI consider a roll over of all loans to realty sector, like they did during the 2008 crisis in the aftermath of the collapse of Lehmann Brothers.”

Shirish Deshpande of Mumbai Grahak Panchayat, said, “This will certainly go a long way in providing much-needed relief to the home-buyers as well as to rehab members stuck in incomplete and delayed housing projects in Maharashtra.”

Anuj Puri, Chairman, ANAROCK Property Consultants described the cabinet nod for the AIF as “a critically important move which eliminates the ambiguity which surrounded the timelines for setting up the fund, and its actual implementation.”