Maharashtra: State No. 1 in justice delivery 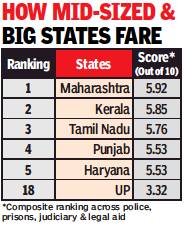 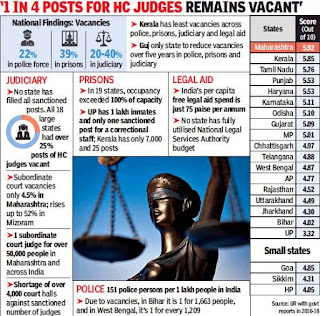 Maharashtra emerged as the best state for justice delivery in the country in the first such ranking, but could not score even 60% in performance in police, prison, judiciary and legal aid—the four pillars of justice. Goa topped among the small states.

The India Justice Report - 2019 placed Kerala and TN second and third, followed by Punjab and Haryana. Among the smaller states, Goa was followed by Sikkim and HP.

The report, a civil society study relying on government data since 2012, shines the light on problems plaguing the justice system, and retired SC Justice Madan Lokur hoped it would be used to “urgently plug the gaps in management of the police, prisons, forensics, justice delivery, legal aid and (in) filling up the vacancies”.

The vacancies are telling — 2% in police force, 39% in prisons and 20-40% in judiciary. More than one in four sanctioned HC judge posts had not been filled as of 2016-17, the report says, adding that only half the states made efforts to cut vacancies in the last five years.

Women were under-represented in all four areas of justice delivery while prisons remained overcrowded at 114% of capacity. Of these, almost 70% were undertrials awaiting probe or trial, it said.

Maharashtra scored a high of 5.92 out of 10 in the first Indian Justice Report, 2019, while Kerala scored 5.85 and TN 5.76. Interestingly, Maharashtra didn’t lead in any of the four categories, but emerged on top in overall performance. Its best showing was in prison administration (score 7), but even there Kerala was ahead. Kerala flopped on the police front—it ranked 13th out of 18 states— but led on prisons and legal aid.TN ranked first on police and judiciary, but 10th and 12th on prisons and legal aid.

Maharashtra ranked fifth in dispensation of legal aid. “India’s per capita spend on free legal aid—which 80% of the 1.25 billion people is eligible for—is 75 paise per annum,” the report revealed. Shockingly, it pointed out that in UP, there is only one sanctioned post of a correctional officer for almost 1 lakh prison inmates.

The individual scorecard of the states shows “serious lacunae in our justice delivery system”, said (retd) Justice Lokur, calling the report an “excellent effort to mainstream the issues of the justice system”.

Former CJI M N Venkatachaliah stressed on paying attention “before it is too late” and lauded “the commendable purpose of the report to attract attention to two important areas of national concern—access to justice and the health of our institutions responsible for justice delivery”.

The ranking, an initiative of the Tata Trusts in collaboration with the Centre for Social Justice, Common Cause, Commonwealth Human Rights Initiative, Daksh, Tiss-Prayas and Vidhi Centre for Legal Policy, involved an 18-month quantitative research of “siloed statistics from government sources”, said Shireen Vakil, head of policy and advocacy at the Tata Trusts. The report assessed all 29 states and seven Union Territories.

West Bengal, No. 12 overall, scored less than 5 and UP, at the bottom, scored just over 3 in police and legal aid. Bihar, second last on the list, was the lowest performer in judiciary. Jharkand was worst in jails.

India spends 0.08% of its GDP on the judiciary, said the report. “On an average, except Delhi (1.9%), every other state and UT spends less than 1% on its judiciary,’’ said the report, using a per capita expenditure as a comparator. The average case pendency was five years, and judicial delays cost the country about 0.5% of GDP annually, or about Rs.50,000 crore considering the GDP in 2015-16, said the report.

While other factors, including witness absence, adjournments, impact case progress, the report found an “undeniable influence of excessive and persistent vacancies”.