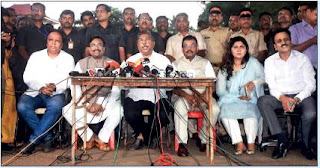 The political crisis in Maharashtra deepened with the BJP announcing that it would not form the government in view of ally Shiv Sena’s stand to not join them.

After several rounds of discussion with party leaders and ministers, caretaker Chief Minister Devendra Fadnavis called on Governor Bhagat Singh Koshyari and declared the BJP’s inability to form the government in the state.

After a short break in the afternoon, the BJP leaders again met for talks. It was conveyed to them that the central leadership was also opposed to the idea of sharing the chief minister’s post with Sena. Fadnavis, state BJP president Chandrakant Patil, senior state leaders Girish Mahajan, Pankaja Munde and Vinod Tawde and the party’s national general secretary V Satish were part of the meeting. It ended around 5.30 pm after which a few leaders, including Fadnavis, met the Governor. Later Patil addressed the media. “The BJP will not form the government even though the Governor invited us. People have given a mandate to our grand alliance with Shiv Sena, BJP, RPI, RSP and Shiv Sangram,” Patil said.

The Sena and the BJP had some informal exchanges regarding government formation, but the former remained fixated on sharing the chief ministership as promised during the Lok Sabha elections.

Shiv Sena chief Uddhav Thackeray had a meeting with his legislators at Hotel Retreat on Madh island in which he reportedly said that Prime Minister Narendra Modi had called him several times but he refused to respond. At the same time he said that he had not broken the alliance with the BJP and also praised the PM for doing a good job, said a Sena MLA who was present at the meeting.

Since the BJP expressed inability, the Governor invited the Sena, the second-largest party, to form the government by 7.30 pm tomorrow. The Sena will have to get support from the NCP and the Congress. “We know it will be an uphill task for the Sena to get the required numbers by Monday evening. After tasting failure, they will fall in line,’’ said a BJP minister.

A senior NCP leader said that so far BJP president Amit Shah and PM Modi have not revealed their cards.