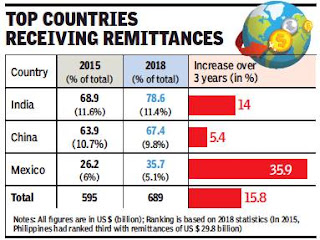 Even in 2010 and 2015, for which data is available, India was the top recipient of remittances. Remittances during 2010 were $53.48 billion, rising to $68.91 in 2015 — an increase of nearly 29%. The increase in remittance between 2015 and 2018 is 14%. As compared with the remittances in 2010, the latest figure of $78.61 billion shows a rise of nearly 47%. These statistics were disclosed in the World Migration Report 2020, which was released on Wednesday by International Organisation for Migration, which is United Nation’s migration unit.

High income countries are almost always the main source of remittances. For decades, the US has consistently been the top remittance-sending country, with a total outflow of $68 billion, followed by UAE ($44.4 billion) and Saudi Arabia ($36.1 billion), the report states.