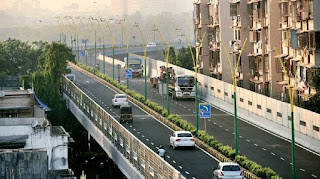 Caretaker Chief Minister Devendra Fadnavis announced that the Bandra Kurla Complex-Chunabhatti Connector was open to public use. “In public interest, I declare that BKC-Chunabhatti Connector (flyover) stands open from today evening. With this, Mumbaikars will now save 30 minutes travel time and avoid traffic congestion at Dharavi and Sion junctions,” Fadnavis had tweeted. In another tweet he said that the 1.6-km long, 17-metre wide and four-lane connector will ease traffic towards Thane-Nashik and Panvel-Pune, and added that it will provide faster connectivity to and from the Eastern Express Highway.

The Rs.203-crore connector, which was under construction for four years, is an engineering marvel wherein a 230-metre-long stretch passes over Mithi river and has 50-metre long rail overbridges over tracks near Sion and Chunabhatti.

The NCP had alleged that the BJP-Shiv Sena government did not inaugurate the flyover earlier, despite it being ready before the elections.

MMRDA officers claimed that the inauguration was delayed because of the rains.