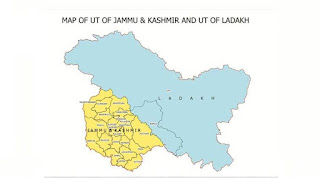 The political maps of newly-formed UTs of J&K and Ladakh released by the Survey of India depict UT of J&K as comprising 22 districts including Muzaffarabad and Mirpur in POK. The UT of Ladakh, as per the latest map, has two districts of Kargil and Leh, with the latter encompassing the erstwhile districts of Gilgit, Gilgit Wazarat, Chilhas, Tribal Territory, and Leh and Ladakh.

The Leh district of the new UT of Ladakh has been defined in the Jammu and Kashmir Reorganisation (Removal of Difficulties) Second Order, 2019, issued by the President, to include areas of the districts of Gilgit, Gilgit Wazarat, Chilhas and Tribal Territory of 1947, in addition to the remaining areas of Leh and the Ladakh districts of 1947, after carving out the Kargil district.