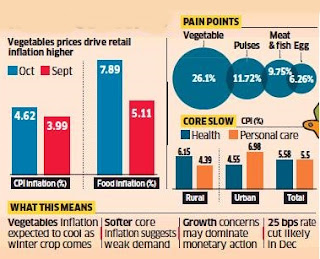 Retail inflation accelerated to a 16-month high in October and breached the Reserve Bank of India’s medium-term target of 4% for the first time since July 2018 as food prices increased.

Inflation as measured by the Consumer Price Index was 4.62% last month compared with 3.99% in September as food prices rose 7.89% from 5.11% in September on pricier vegetables. The sharp uptick in consumer inflation dampened expectations of a big cut in interest rates by the RBI in December, although most experts expect monetary easing to continue, given the deepening economic slowdown.

Core inflation — excluding volatile energy and food items — declined to a 94-month low of 3.47% in October and will provide comfort to the monetary policy committee, which sets interest rates. Core inflation is seen as a measure of demand and its decline suggests weak consumer sentiment.

The lender expects RBI to cut rates by 25 basis points in December to support growth, looking through the volatile food inflation spikes. The RBI has cut rates by 135 basis points this year to 5.15%. One basis point is one-hundredth of a percentage point. The monetary policy committee will announce the next round of monetary action on December 5.